CROIX
Not your typical Texas guy, but I'm your average Joe. Both at the same time!................. Im a Stand-up philosopher. I coalesce the vapors of human experience into a viable and meaningful comprehension. *OH.. YOU'RE A BULLSHIT ARTIST!* - History of the World Part 1 ...................... Mr. Braddock: Would you mind telling me then what those four years of college were for? What was the point of all that hard work? Benjamin: You got me.

Well, I didn't get a call that I was looking forward to this week. That means I need to keep looking. I actually talked with someone on the phone today about a job opening and I'm at the point where I'm afraid to say anything. I can no longer formulate words or ideas. I feel like I might say something wrong. I get really nervous, like the first day of speech class. Instead of progressing I'm regressing. I'm shutting down fast and its scary. One more full day until I'm homeless.
Posted by CROIX at 7:20 PM 1 comment:

"Ladies and gentlemen, we are about to begin our descent into Los Angeles. The sound you just heard is the landing gear locking into place. Los Angeles weather is clear; temperature is 72. We expect to make our 4 hour and 18 minute flight on schedule. We have enjoyed having you on board, and look forward to seeing you again in the near future. "

The truth about being unemployed since April 15, 2010 - It is now July 27, 2010 and have run out of money. (lay off) While I'm still getting unemployment money the truth is - come August 1, I will officially be homeless. Seeking refuge with some friends for a while - until something comes up. I'm now applying for jobs as if I were a teenager again. Yeah, the cardboard hats and fat vats aren't looking as bad as they did a month ago. (What would Sue Ellen Crandell do?!) While I know I won't be as homeless as the men under the bridge, I am now unable to sustain my individual lifestyle. I can always visit my parents if I need to, but I am really hoping that won't happen.

Friends have told me "maybe its a good thing" to go back home with my parents... etc. etc. I see no advantage being there. I am in control and refuse to give up. Today, however, I felt bad.

For the many MANY unemployed people out there - I can only hope it will get better for us all. 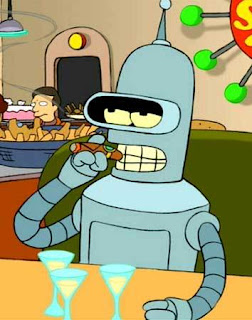 Some silly facebook status was going around asking people who they thought they looked like. As in a celebrity, athelete, or someone famous I guess. I couldn't find anyone that looked like me at all. So I thought about putting Brian from Family Guy, cause I do drink and smoke, and tend to act like him a lot. But I went with Bender, he's my alter ego whenever I've had a little too much to drink.
Good Job Bender! I'm glad I found my look alike!
Posted by CROIX at 5:56 PM No comments: 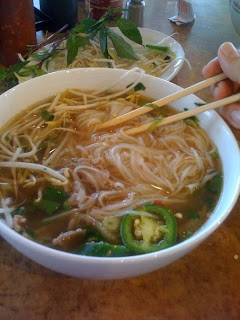 listen (help·info) in Vietnamese; in English, written pho and typically pronounced /ˈfʌ/[1]) is a Vietnamese thinly sliced meat and noodle soup dish. The soup includes noodles made from rice and is often served with basil, lime, sprouts and peppers that are added to the soup by the customer (as well as any condiments desired). The most common variety includes thinly sliced beef brisket or flank.


Delicious! Spicy and Delicious. Definitely food for the soul! You must try it.
Posted by CROIX at 8:11 PM 5 comments: 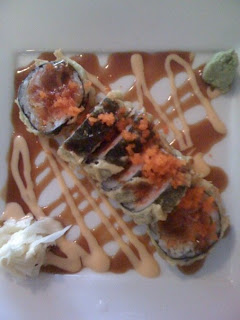 I went to a Sushi House this evening to have some well deserved Sushi. (The best food ever!) I've eaten Sushi at many places around Austin, but none compare to Maru Sushi!

I was a little hesitant ordering from there because they're a little more expensive than other sushi houses. But this six piece "Samurai Roll" was plenty for even ME to eat.

The Samurai Roll has smoked salmon, crab, avocado, and sweet potato in it. Sensational! The texture was VERY fresh. The serving sauce complimented the filling by not overpowering it. The sauce was somewhat neutral, and the ginger slices added zing to the delicious roll itself. Wasabi? Sorry folks, even this Jalapeno loving guy won't eat that stuff. (Bad experience)

Aside from the $12.00 price for this one roll, it was completely filling, and extremely satisfying. If you're ever in Austin, or live here already Maru Sushi is well worth the money. (They let you bring in your own wine!)

My friends will always be her friends too. And while thats fine, it makes me not want to confide in anyone anymore. Because of conflicts like this whole "inviting me to vegas" but not her, then she's saying "why not me?" thing... I realize this kind of thing is going to happen over and over. She thinks everyone there is her best friend and I think everyone there is MY best friend. Sooner or later hers or my toes are gonna get run over. This time it was her. Next time will probably be me. (estimation.. September '09) . Then or not, its inevitable. But I do see this situation as preventable, by one of us moving on completely. And for the sake of my own sanity, a difficult and sad option for me to consider. I love my San Angelo friends, but maybe letting go of them as my support system wouldn't be a bad idea. Even thinking this makes my eyes well up with tears.

MAN, I didn't want this blog to be a spill your guts diary. UGH. IT WONT! I promise!! I'm going to take some pictures this weekend through the hill country on my trip back to Del Rio, I'll have the top down, I'll make sure to post them and blog about them. I'll also photograph my dinner I'm planning for Saturday and let you know how it turns out!
Posted by CROIX at 11:36 AM 2 comments:

Even if I miss San Angelo with all my heart, having the ex show up to a friends house while I'm on the phone with them still makes me feel kinda sick and upset, makes me glad I'm not there. Maybe I should not be there. Maybe even if my heart hurts and misses the place and the people, if I still feel like this when I hear her name or that she is at my friends' houses, perhaps I don't belong there at all. Maybe the place I think of as home, isn't really what I think it is.

Any thoughts or takes on this?
Posted by CROIX at 11:02 PM 3 comments: